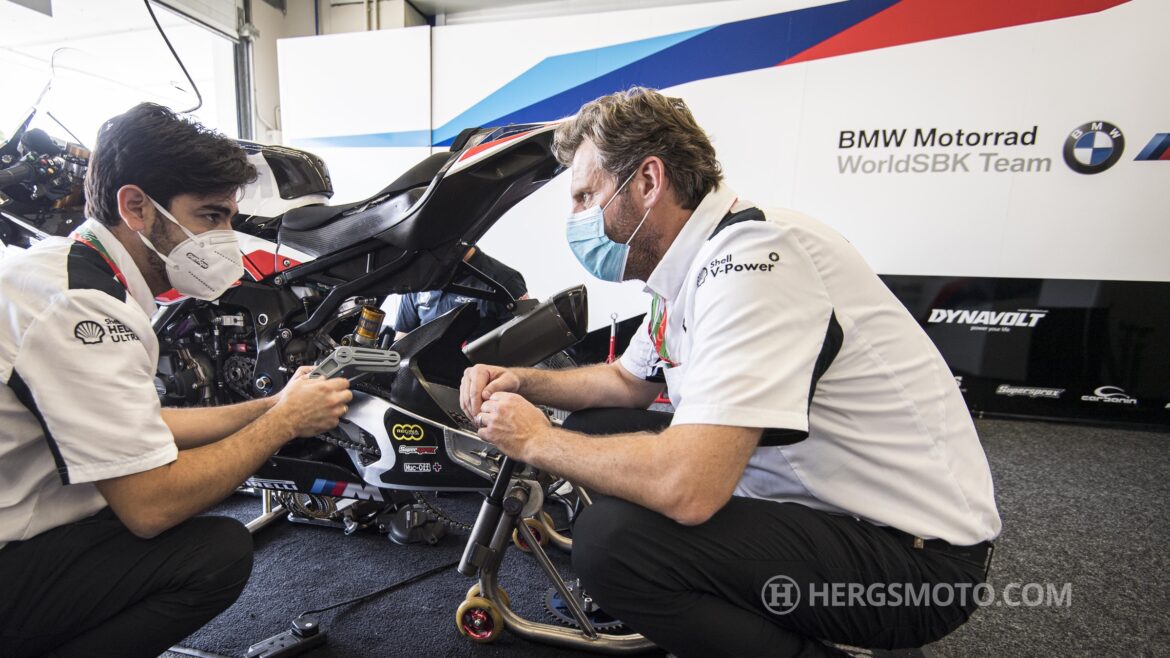 The BMW Group already applies 3D printing to production procedures in many areas and BMW Motorrad Motorsport, also takes advantage of this innovative technology with the BMW Motorrad WorldSBK Team.

It enables fast and efficient production of new prototype components right at the circuit. These can then be tested on the BMW S 1000 RR before they go into final production in Munich or at supplier locations. It also means that smaller parts that are often not subject to intense stresses can be made on-site and then used in races.

Normally, the process is that engineers develop new components, which are simulated on computers, manufactured in metal or carbon, installed on the motorbike and then tested on the racetrack. However, the 3D printing capability makes it possible to develop and test new components during race operations. BMW Motorrad Motorsport has a portable 3D printer that travels to each circuit in the truck and is then assembled in the BMW Motorrad WorldSBK Team pit area on race weekends in the FIM Superbike World Championship (WorldSBK).

“This technology allows us to make improvements to the RR quickly and efficiently. The development of a WorldSBK bike is an ongoing process and it is often the minor details that make a motorbike better.

Behind the scenes, our engineers are always working on adjusting and optimising individual bike components, all within the framework of changes permitted by the regulations. We can use 3D printing to implement these at the racetrack, even during race events. We then take the acquired data and the subsequent analyses, combined with comments from the drivers or input from the mechanics working on the bike itself and generate input for the development team. This input contributes to the emergence of ideas that can be implemented directly in existing constructions or in simulations and iterative processes that lead to new constructions, all of which are executed in CAD.

The new components are printed as plastic variants and their functions and ease of installation are checked on the bike. This process is now much faster than when we had to wait until the parts were produced either internally or externally and made available for evaluation at the racetrack. It is also easier to evaluate potential touching with surrounding parts or restricted access than it would be on screen.” – said BMW Motorrad Motorsport Director Marc Bongers.

Another advantage is if an adjustment is required, it can often be made to the existing plastic part and then implemented in CAD. This process can be swiftly repeated as often as required, until the part corresponds 100 percent to the requirements. First, a ‘dummy print’ is created for the component which then can be directly evaluated and adjusted. “Normally, you have finished components that you have developed with calculation, construction and simulation, and which you then evaluate during testing or on race weekends.

The risk is always that, as the complete package becomes ever more complex, errors in construction, difficulties with installation or access to the part can be overlooked,” said Bongers. “3D printing allows us to create parts quickly and cost-effectively, and to optimise this during the ongoing process. As soon as we have the part just as we need it, we send the final data to the workshop, which then manufactures it for competitive racing from a suitable material, normally metal or carbon.”

An example from the WorldSBK double-header at Jerez (ESP) and Portimão (POR) shows how fast and efficient this procedure is. In Jerez, the linkage system of the rear shock absorber was optimised, based on the riding data. A prototype of the 3D-printed part was installed and tested. The final data was then sent to the supplier, who then used the data to manufacture a new linkage system between the race days. A few days later, in time for the start of the next race weekend at Portimão, it was available for installation on the BMW S 1000 RR. If smaller components or spare parts, which are not subject to such extreme stresses, need to be manufactured, the complete process can take place on-site with the 3D printer. Examples for such parts include adjustment levers, sensor holders and quick-release couplings.

The campus opened in June 2020, brings together production of prototype and series parts under one roof, along with research into new 3D printing technologies, and associate training for the global rollout of toolless production. The campus, which came at an investment of €15 million, will allow the BMW Group to develop its position as technology leader in the utilisation of additive manufacturing in the automotive industry.

This channel provides the team with unique access to not only the advisory 3D printing experts, but also to a comprehensive range of printing methods and various materials for different applications. Manufacturing of the components can be triggered directly from the track, via BMW’s own systems. Examples of parts that are printed in plastics or metals directly for use on the World Superbike include brake ventilation in plastics reinforced with carbon fibre, complex moulded parts, titanium crash pads, aluminium distributor boxes and aerodynamic trim parts.

The BMW Group first started the additive manufacturing of prototype parts back in 1991, for concept vehicles. By 2010, plastic-and metal-based processes were being rolled out, initially in smaller series, to produce items such as the additively manufactured water pump wheel in the DTM race cars. Further series production applications followed from 2012 on, with a range of components for the Rolls-Royce Phantom, BMW i8 Roadster (2017) and MINI John Cooper Works GP (2020), which contains no less than four 3D-printed components as standard.

This advanced application of technology is now being utilised track-side with the WSBK Team.