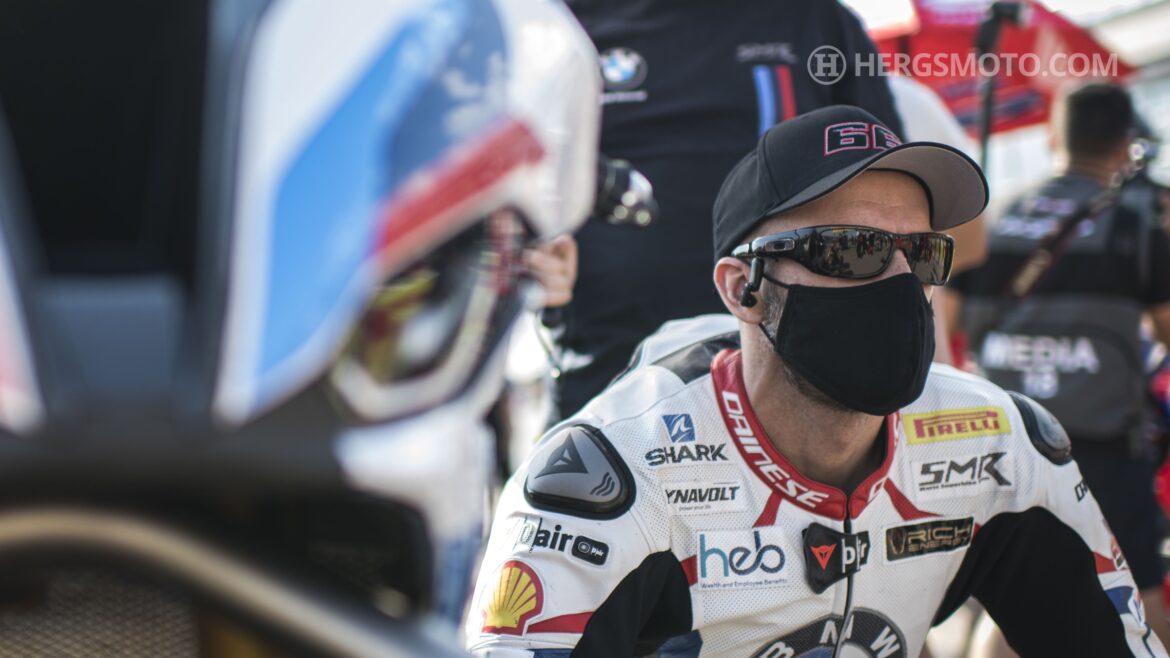 Alcañiz. The BMW Motorrad WorldSBK team ended the double-header at MotorLand Aragón (ESP) with the Superpole race and race two on Sunday. The racetrack near Alcañiz hosted the fourth and fifth events of the FIM Superbike World Championship season. In the Superpole race, Tom Sykes (GBR) and Eugene Laverty (IRL) finished in P9 and P14 on their BMW S 1000 RRs. In the second main race, Laverty finished in eleventh. For Sykes, a minor technical issue had a major impact and he was unable to compete.

Sykes started the sprint race on Sunday morning from fourth on the grid but lost positions over the ten laps and crossed the finish line in ninth place. Laverty, who started from 16thon the grid, made up two places and was in 14th at the chequered flag. For the second main race in the afternoon, that meant ninth on the grid for Sykes and 16th for Laverty.

When the field completed the warm-up lap from the starting grid, Sykes’ quickshifter failed. Instead of being able to return to the grid, he had to head for the pit and his race was over before it could really get started. From 16th on the grid, Laverty put pressure on the riders in front of him as he had done on Saturday, and got embroiled in several duels. That saw him pick up further points for finishing eleventh after 20 laps.

Marc Bongers, BMW Motorrad Motorsport Director: “Despite the disappointing results today, we were able to gain additional knowledge this weekend and find a set-up to be better prepared for these conditions despite our known deficits. That’s the positive thing that we will take with us into the next races. Eugene had a solid race again, especially in the afternoon. Unfortunately, Tom had bad luck with the quickshifter. He had to go back to the pits, and as that stop lasted longer than the first lap of the race, we were no longer allowed to start according to the regulations. I hope that we have now had our share of bad luck. We look ahead and keep working hard.”

Shaun Muir, Team Principal BMW Motorrad WorldSBK Team: “The Superpole Race was not so bad for Tom. I was quite happy with the way he rode, we cured the issue of the lap time dropping in latter stages and he rode a very consistent race, in the end he consolidated his ninth and got himself ninth on the grid for race two. Eugene started to come through at the end of the sprint race and maybe given a few a more laps could have been on for another top eight. The final race of the weekend was a disaster for Tom. Unfortunately, he was forced out the race with a quickshifter issue which we cannot quite understand yet. That will be investigated in due course. For Eugene, he went out with the X tyre in the race, again a similar outcome in the fact that with a few more laps he quite possibly could have got another top eight, but it’s another day of what could have been. We will go away, investigate, and come back stronger for Barcelona.”

Eugene Laverty: “This morning’s short race was not going to suit me today as I came strong in the latter stage of yesterday’s race one, so it was always going to be a challenge to get myself further up the field. For the final race of the weekend I was optimistic, but unfortunately it seemed that others were able to maintain their pace better. We need to find a way to use the rear tyre in the same way our competition does, but while it may not look it on paper, we have made huge progress in these last six days at Motorland Aragón. The bike is starting to work really well; there is just one final piece of the puzzle which is to really extract everything from the rear tyre, which I’m sure we can get to in Barcelona.”

Tom Sykes: “Credit to the boys, we made a lot of small adjustments from yesterday and I have to say I was very comfortable with the bike. In the sprint race, it was clear to see where our disadvantage was but given the nature of the track, I was impressed with how the chassis was working. I really feel that we understood our limitations well, and for that I am happy. We certainly gave away some straight-line performance which was difficult to manage, but our lap times stayed very consistent which again was a positive. Going into race two it was time we made the choice to go with the softer tyre which gives us a great performance. I was very interested to see where we would have been after nine or ten laps because in the sprint race we were keeping very consistent and other riders started to drop. So, for me I was very optimistic but unfortunately, we had a technical issue when we left the grid. I came in to see if it could be fixed but we missed the start which was disappointing. It was frustrating because looking at the lap times in the race they were not running a massively fast pace and the guys I’ve been battling with ended up fourth in that race so, we had a possible good result. These things happen in racing. The main thing is we will learn from this and try at the next one.”