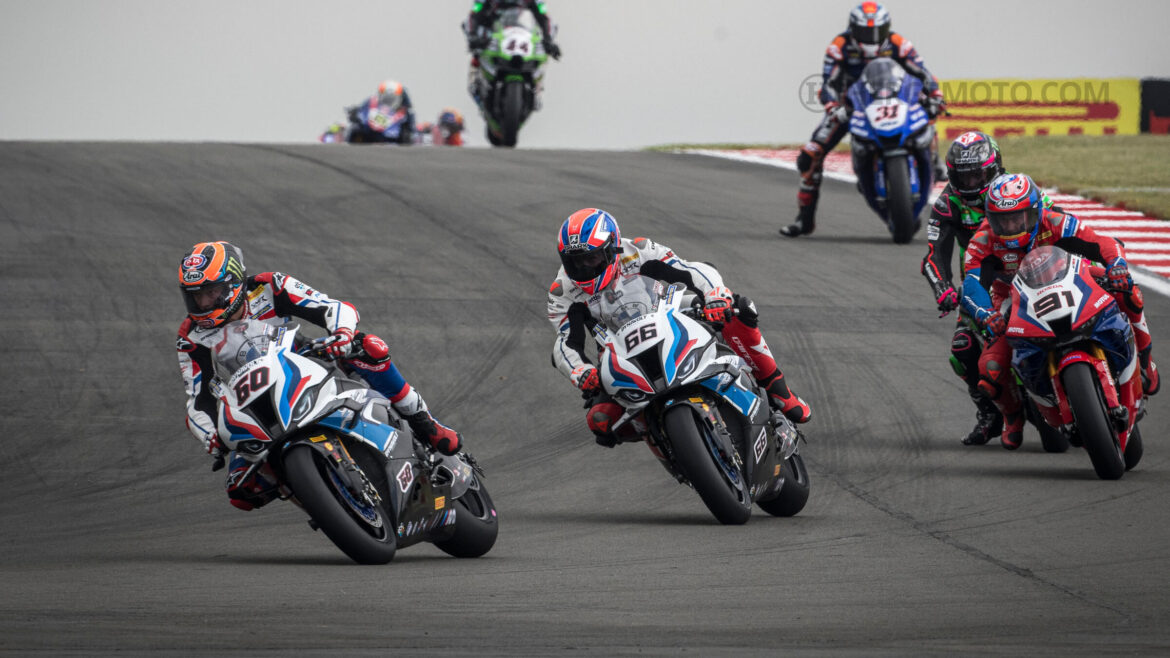 In the morning’s Superpole race, Tom Sykes (GBR) and Michael van der Mark (NED) finished second and third to record a double podium, while Sykes finished third in the afternoon’s second main race to reach the rostrum once again. Van der Mark crossed the finish line in a good fifth place. Donington Park hosted round four of the 2021 WorldSBK season.

The BMW Motorrad WorldSBK Team had laid the foundations for Sunday’s success in Superpole qualifying on Saturday, as van der Mark and Sykes began the Superpole race in the morning from second and third places on the grid. Rain showers made a brief appearance before the sprint race but the circuit dried out quickly. In common with much of the field, both BMW Motorrad WorldSBK Team riders went with intermediate tyres. They both initially dropped back by one place on the first lap but regained those positions on lap two and did not surrender them thereafter. After ten laps, Sykes finished second and van der Mark third to secure not just the first WorldSBK podium for the new M RR, but a double podium finish.

As the Superpole race decided the grid for race two that afternoon, they had a great start position with both riders back on the front row again, Sykes in second and van der Mark in third. Sykes exited the first turns in third place, staying in touch with leading duo Jonathan Rea (GBR / Kawasaki) and Toprak Razgatlioglu (TUR / Yamaha). Sykes dropped back to fourth place for a short while around the halfway point of the race, but the BMW rider moved back to third after a fall for leader Rea. He then defended until the chequered flag was waved after 23 laps – celebrating his second podium finish of the day. Van der Mark lost ground at the start but moved back into fifth place on lap 16 to secure another top five finish.

Eugene Laverty (IRL) crossed the finish line in twelfth place in the Superpole race on the BMW M 1000 RR of BMW satellite team RC Squadra Corse. He finished 15th in race two, scoring another world championship point. Jonas Folger (GER) from the BMW satellite team Bonovo MGM Racing claimed 16th place in the morning’s sprint race. He then retired early from the afternoon race as the quickshifter did not work properly.

“We are very happy. It’s very good to get this under the belt, it takes away a bit of the pressure when we focus on the next rounds. As I said yesterday, there is still some work to do. I was hoping for some rain today but it didn’t come in the afternoon. So it was very, very good to confirm our performance in a full dry race on slicks as we were definitely not as competitive in such conditions in the last race and also at the beginning of this weekend. Overall, to come away with three podiums is of course very, very pleasing. This is something we can build on. Crucial for this weekend was definitely our Superpole qualifying because if you look at the pace of the others you know that you could easily be sixth, seventh or eighth if you are not in that front row. Now it’s time to settle down, look at the data, gather our thoughts and make the next step.”

“It was a fantastic day. It’s our home track, the home round for Tom and us, so it was a sensational day for all. I think we stepped up. We’ve come back from a really disappointing Misano round, we have reacted. In the sprint race, there were changeable conditions and almost everyone went for intermediate tyres which was the right decision. Then in race two, with dry conditions, all started on slicks and it shows the step we have made with the BMW M 1000 RR. We were literally a few seconds off the win. We always were in contention for the podium and Tom did a fantastic race and Michael was not far behind him. He withstood the pressure from Alex Lowes on the Kawasaki and brought the bike home in a strong fifth. Now we all are looking forward to Michael’s home round at Assen.”

“Credit to the whole BMW Motorrad WorldSBK Team. We have come here, tried to just assess the situation after the Navarra test and really, I am happy. I was training at the beginning of the week and when I came to my house and got off my pushbike, I knew: this is the weekend. Considering what we learned at Navarra I would be going to drag the thing around Donington Park if I have to. On Friday, I was pushing the boundaries and went to the deck twice. Normally I ride to the limit and stop just like I did today in the race. The guys did an incredible job, giving me a perfect bike in terms of what we had available in our tool box so I think we got the best from our package this weekend. Still, we need to improve but this is a whole confidence boost for the team and me. It gives everyone what they deserve. And what’s really nice is that we had two BMWs, myself and Michael, on the front row in wet conditions and then with the intermediates in tricky conditions, we were on the podium again – both BMWs, second and third. Then in that last race, it was tricky in the beginning but ultimately a dry race on a different rear tyre. I am not really sure if I am happy with the tyre I chose but we dug deep and the tyre gave us a podium so for this I am happy. Hopefully now we can continue with the information we have and try to keep improving.”

“We had a really good Sunday. It was nice this morning in the Superpole race. The track was a little bit tricky so early everyone went on intermediates and it was the right choice. I really enjoyed it. It was good to finish on the podium together with Tom. Then in race two I had quite a good feeling but I just struggled too much in changing directions; I lost a lot of time there compared to the other guys. But in the end, we finished fifth so we have a lot of valuable points and it was nice to have Tom on the podium again.”

“It was a pretty difficult weekend here at Donington Park. I had high hopes for here because I know the character of the BMW M 1000 RR is well suited to the majority of the flowing Donington track but we never had a good feeling this weekend. That has been the case with the bike since my big crash at Misano so now we have to investigate if there is some damage from the bike from the crash that hasn’t still been recognized because it’s impossible to be so slow this weekend when we see what the official BMWs were doing. We should be there together with them. So let’s investigate and come back stronger.”

“It was a difficult weekend and I am sorry for the entire team that we find ourselves in this situation. Right now, we are searching for solutions that we have not yet been able to find. I hope that things will improve soon and we can make progress.”