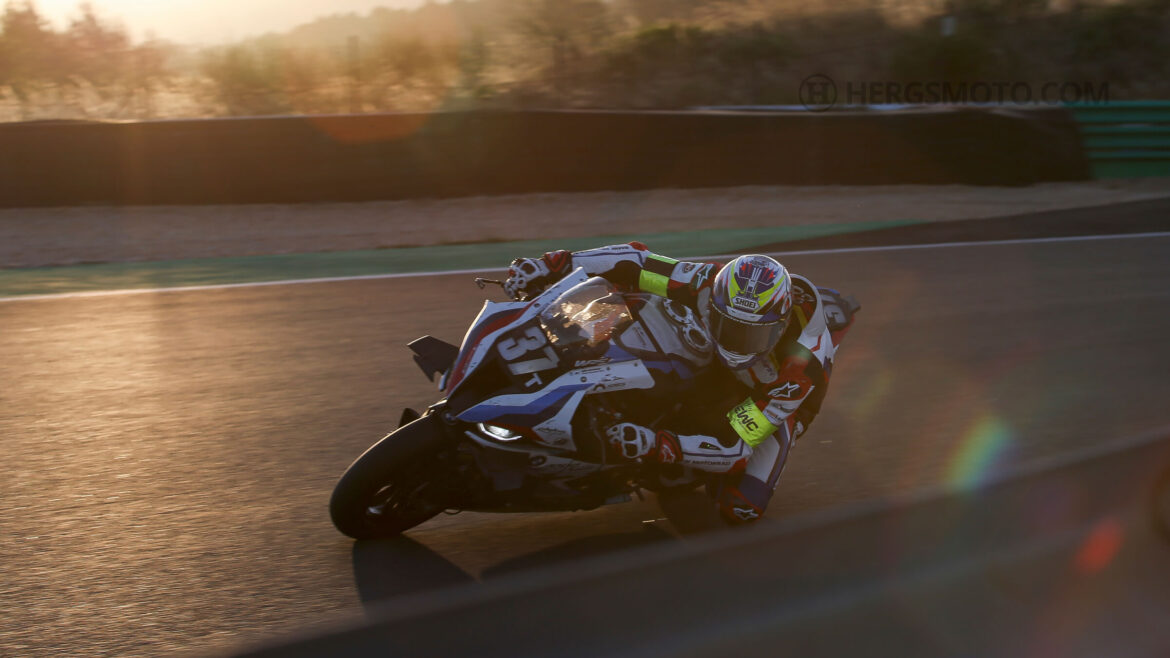 In the, at times, dramatic 12-hour race at Estoril (POR), Xavi Forés (ESP), Markus Reiterberger (GER) and Kenny Foray (FRA) secured third place on the podium as at the Le Mans (FRA) season opener. Once again they battled their way back up the field impressively after a fall in the opening stage forced the team right down the field to start with. The podium finish was a fitting present for Team Manager Werner Daemen’s 50th birthday.

Everything was going perfectly for the BMW Motorrad World Endurance Team to begin with. Starting from second on the grid, Forés took the lead after just a few minutes. The #37 M RR dropped back into second place briefly after about 50 minutes, but was soon back in front. Reiterberger then extended the lead but after almost two and a half hours of racing Foray skidded while in the lead and fell. He returned the #37 M RR to the pits and after a repair break lasting four and a half minutes it was back to the race. The BMW Motorrad World Endurance Team was temporarily in 20th place and trailing by four laps, but from there the only way was up.

The rest of the race was turbulent at times, with various race leaders dropping right down the field after falls or issues, but went without a hitch for Forés, Reiterberger and Foray and they made up place after place with fast lap times. Forés held the fastest lap time of the whole field for quite some time. After five hours of racing they had worked their way into the top ten. The trio was in sixth place after seven hours, and moved up into fourth place soon after, when two motorbikes in the leading pack collided. That was when the BMW Motorrad World Endurance Team set about reducing the margin to the top three.

In the final stage the race became something of a real sprint thriller. Ninety minutes before the end the team leading at that time developed a problem which put the podium within realistic reach of the #37 M RR. When all the teams had completed their final pit stops 30 minutes before the chequered flag, Reiterberger, the closing rider, was just ten seconds off the podium. He really went for it and set the team’s fastest race lap in the final stint (just six-thousandths of a second behind the fastest lap overall). Reiterberger closed the gap to two seconds – and just a few minutes before the end of the race, the rider in third place ended up in the gravel. That cleared the path to third place and the second podium finish in a row. After 416 laps, Reiterberger crossed the finish line in third place with the #37 M RR, just 0.976 seconds behind second place.

Quotes after the ‘12 Hours of Estoril’.

“Congratulations to the whole team on another fantastic performance. It was a real thriller and history repeated itself. It was similar to Le Mans: leading shortly after the start, then a setback, then moving up the field to finish on the podium. We weren’t quite able to race at our pace in the first stint with the cool track temperatures. Things went really well from the second stint and our pace was definitely good enough to win.

Unfortunately, Kenny fell and we dropped down to P20. Everyone did a magnificent job in the ensuing race to catch up. Our pace was really good down to the wire, but realistically we wouldn’t have done better than P4 or P5. But the other teams also experienced a few dramas, so the battle for P2 to P4 was really close in the end. We had to change the brakes, which was planned, but the final two stints from Xavi and Markus were incredibly strong so we really piled the pressure on the rider in third place. To end up finishing in P3 less than one second behind second place – after the fall at the beginning – we have to be pleased with that result. We saw that we had the pace required to win.

Now we are in a very good starting position for the rest of the season, and our motto for the Bol d’Or in September is ‘full attack’. After all, we are still in with a chance of winning the world championship. We still have some work to do, but have a very good team, a very good bike, and the potential to become even better. I’d like to thank the team, they did a fantastic job, were great in the pit stops, and I’m happy that we could mark Werner Daemen’s 50th birthday by gifting him this podium.”

“What a big day. It was a very exciting day, to be honest. I’m really enjoying my present now. It also was a very difficult day with the crash and some small issues but in the end we got the podium and I am really, really happy.

I think the team again did a great job and except for the crash, everything was perfect and we showed again that we are among the top runners in the World Championship. I am sure that soon we can reach the highest step of the podium.”

“Xavi did a great opening stint. I took over being in the lead, was able to extend the gap again and hand over the bike in the lead, too. Unfortunately, Kenny then fell. Initially, that was a setback for us all but we kept our focus and always said that we try to get the best out of it. 12 hours is not as long as 24 hours but we still can achieve something.

Xavi did really strong lap times and I then was able, especially in my last stint, to give my everything. The bike worked perfectly for me in cooler conditions. I really pushed and if the race had lasted one lap more, even second place would have been possible. But we made it to the podium and that is the main thing. We are still in the mix in the World Championship.”

“It was a very tough race. Honestly, after the crash we could not expect to finish on the podium. But we had a really good pace, the bike was working really well, so credit to all the team that worked amazingly to fix the bike in a way that I could get 1:39 times in all my stints.

I am really happy with the performance we had all weekend. We have shown that we are really strong and as soon as we can complete the race with no mistakes or issues we will be on the top step. Thank you to the entire team and to Markus and Kenny; they did an amazing job. Now roll on Le Castellet in September.”

“First of all I want to apologise for my crash. It was a small mistake but it what it is. I am very disappointed about it because I think today it was possible to easily win.

The bike was perfect, the tyre, too, and the riders were strong. Especially my team-mates were incredible. I love endurance for that; you never give up and that we could make it to the podium was fantastic. A big thank you to the team, thank you to Xavi and Markus, because it was an incredible effort today.”