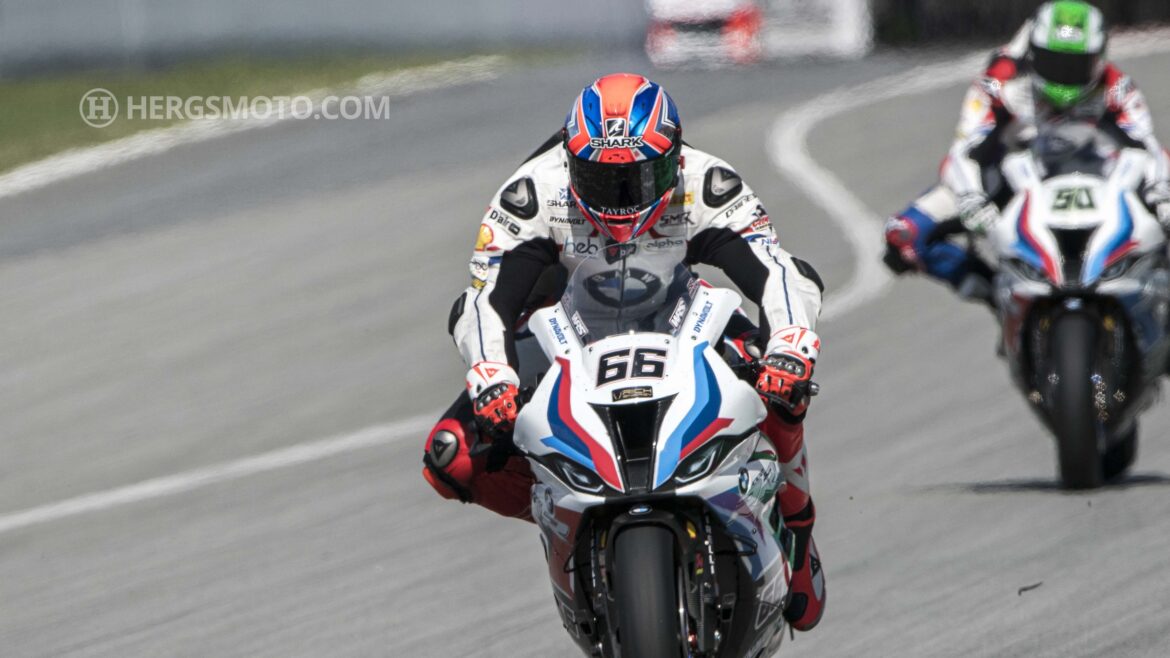 The tide has turned with the BMW Motorrad WorldSBK Team successfully completing the first ever FIM Superbike World Championship (WorldSBK) weekend at Barcelona (ESP) with a strong performance in the second race.

In race two on Sunday afternoon, Tom Sykes (GBR) and Eugene Laverty (IRL) finished in fifth and seventh positions with their BMW S 1000 RRs. This represented the best result in a main race this season for both riders.

Sykes started the Superpole race on Sunday morning from third place before falling back to cross the finish line in ninth. His team-mate Laverty finished eleventh, missing out on the top ten by just four-thousandths of a second. The results saw them starting the second main race in the afternoon from ninth and twelfth places.

When the lights went out at 15:00 local time, both BMW riders immediately moved up a few positions; Sykes moved into seventh place, with Laverty right behind him in eighth. Sykes remained in seventh until the penultimate lap, when he moved up to sixth place after the retirement of Michael Ruben Rinaldi (ITA). Sykes continued to apply pressure during the final lap, passing Scott Redding (GBR) to claim fifth position. Laverty was involved in a dauntless battle with Alex Lowes (GBR) and Leon Haslam (GBR) for long periods of the race before making a great overtaking manoeuvre to pass him on the 16thlap. In the closing stage, Laverty was able to pull away from the riders behind him and was never in danger of surrendering his seventh place.

WorldSBK now moves on to France where the seventh and penultimate race weekend of the season will take place at Magny-Cours in two weeks (2nd to 4th October).

Quotes after race two at Barcelona.

“That was a great relief after our weekend at Barcelona got off to a difficult start. After the reliability issues on Saturday, it was good to finish the Sunday with our best race results of the season. We have been striving for results like this for a long time and it is great to have achieved that – even if it does not yet open up the path to the top. We performed well in warm-up but Tom’s pace in Superpole was too slow at the beginning, which resulted in a slightly disappointing ninth place. However, both Tom and Eugene made a good start to the second race and both of them made it through the turmoil in the first corners. Tom was able to pull away a bit with the leading group and Eugene was involved in a great battle with Lowes and Haslam before coming out on top by finishing seventh. Tom lost contact with the top six around the halfway point of the race but was able to maintain his pace through to the finish and was able to move up to fifth on the final lap, ahead of Redding and Eugene. Now is not the time to relax but we will take this positive development with us to Magny-Cours and we hope that we can repeat our performance there.”

“It’s been a refreshing change today. We managed to get some good consistent laps under our belts this afternoon on the BMW S 1000 RR. We didn’t have the pace at the beginning of the race, we couldn’t get the mechanical grip compared to what the other guys had but, what we were able to do was play with the electronics and my riding style throughout the race and keep a consistent pace, which is what we did well. Unfortunately, we were not able to get the result we wanted in yesterday’s race, but we certainly learned from that so to get fifth today is a step in the right direction. I’m really looking forwards to Magny-Cours in a few weeks’ time. This morning in warm-up with a cooler track temperature, the performance from me and the bike was much easier so hopefully heading to France will accommodate me and the BMW S 1000 RR.”

“I made a good start from P12 on the grid in race two and found myself in P8 at the end of lap one. That made my life a lot easier, but it was a tough old race as I was having vibrations coming from both front a rear tyre, so that made it difficult which is disappointing in that aspect as I know the potential could have been much more. Barcelona has suited the BMW S 1000 RR, even in race one yesterday again our potential was so much more but losing that much time in the opening laps was difficult to bridge the gap to guys ahead. Magny-Cours in France will be an unknown for me as I have not ridden a bike like the BMW S 1000 RR around there before. But that is expected; this year was always going to be a learning curve for both me and the bike.”