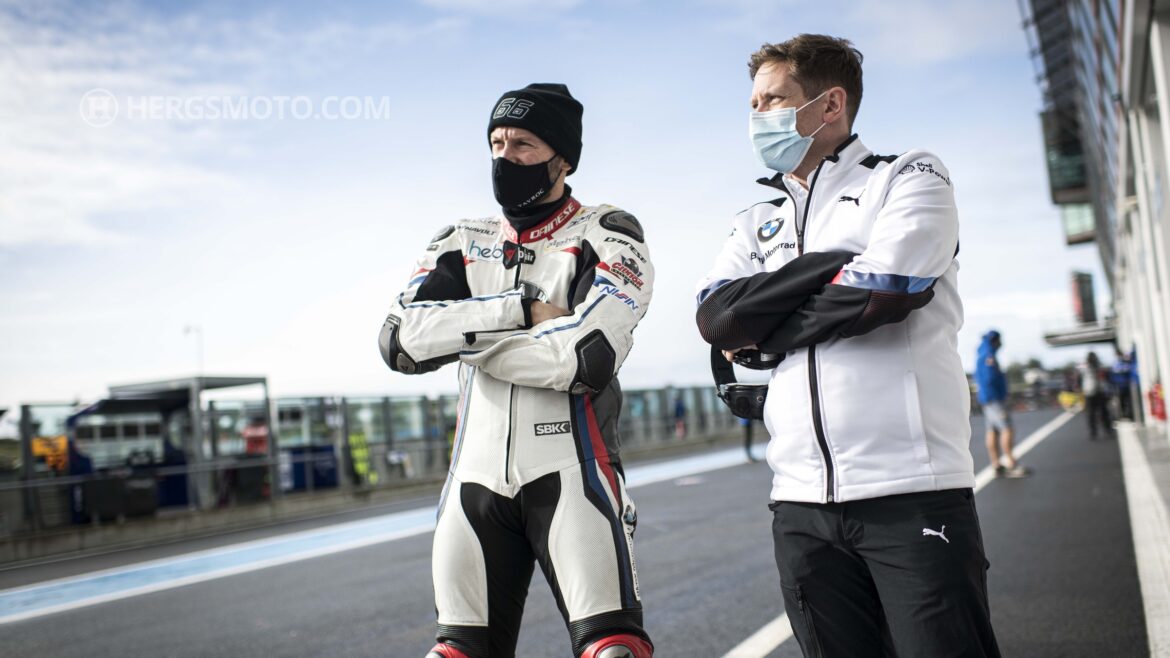 Eugene Laverty (IRL) claimed pole position on his BMW S 1000 RR, closely followed by his team-mate Tom Sykes (GBR) in second place. However, neither rider was at fault when both were forced to retire early from the race. Magny-Cours is hosting the seventh and penultimate round of the 2020 WorldSBK season.

Superpole qualification on Saturday morning took place in extremely tricky conditions. After a period of rain, the sun appeared just in time for Superpole. The two BMW Motorrad WorldSBK Team riders were initially in the midfield, before really cutting loose towards the end of qualification. Team celebrations were big when Laverty secured his first pole position on the BMW S 1000 RR and his team-mate Sykes rounded off the success by claiming second place.

The team was correspondingly optimistic ahead of the first race in the afternoon. It had started to rain around an hour before the start, but the RR had proved to be extremely competitive with the wet-weather setup. However, hopes of claiming top results were soon dashed as Laverty and Sykes fell victim to an unfortunate sequence of events in turn one. There was contact between Garrett Gerloff (USA) and Sykes, who then began to slide and clipped Laverty’s rear wheel. Both BMW riders crashed and the race was over for Sykes and Laverty. Thankfully, neither rider was injured.

Quotes after race one at Magny-Cours.

“What a day. It showed just how close together the ups and downs are in motorsport. Both Tom and Eugene had given great performances in the changeable, but consistently wet conditions since the first practice session. Everything was going perfectly. Tom had coped well with his fall in yesterday’s practice and the team had done a good job to prepare the motorbike perfectly for today. The Superpole session was a thriller but we knew that we could finish really high up. To finish with P1 and P2, the first qualifying 1-2 for BMW Motorrad in WorldSBK, is just fantastic! But the race was just as disappointing as the 1-2 was wonderful. The race finished for both of them in turn one. Gerloff had come from a long way back and went into T1 too hot. He then had to correct and hit Tom on his elbow, which made him fall. Unfortunately, Tom’s bike then clipped the rear wheel of Eugene’s bike, which then saw him come off with a highsider. We find it a bit difficult to understand that Gerloff got away without an official warning or a penalty, but the decision made by the race direction is fixed and we have to accept it. Both of our riders took a bit of a battering, but they are OK. Both of the bikes are badly damaged. We now have a long day ahead of us to put both motorbikes back together. We are looking ahead to tomorrow and we will be ready to go when the riders and bikes are both OK.”

“Qualifying was fantastic for the team to get a 1-2 in wet conditions. Both Tom and Eugene stayed out as long as possible to build their confidence up and they got what they deserved by starting P1 and P2 for race one. I must thank the whole team for their hard work, especially after the recent disappointments. Going into the race it was just cruel luck. Both riders got off the line comfortably with Jonathan Rea taking the lead. Garrett Gerloff came tight up the inside of Tom, however Tom already had the racing line, which meant he collided with him. That caused Tom to crash and ultimately take out his teammate Eugene at T1. As a team we are very disappointed in the race direction’s decision not to penalise Garrett for causing the crash. We feel he should have been penalised for his unsafe and out of control actions that led to this big consequence for our team. This does not help our cause moving forward, but we will fix our bikes tonight and come out fighting again tomorrow.”

“After the fantastic qualifying we had pole position and I was feeling optimistic ahead of race one. My aim was to bide my time and see where we ended up. Our bike has been working fantastic in these wet conditions, so I knew we had a good chance today. Our aim after the great qualifying session was to get that podium, so starting from P1 gave us the perfect chance to do that. Unfortunately, that was not the case after getting taken out in a crash caused by Garrett Gerloff. I am really angry about this crash because in a wet race like this to go in at the angle he did at T1 is not really the smart thing to do. It’s lucky that nobody got seriously hurt. However, tomorrow is another day, we will get another chance to showcase our potential, I will push hard from the off and get stuck in.”

“It was definitely a good showing from the whole BMW Motorrad WorldSBK Team today. The BMW S 1000 RR has been working well all weekend and I had a great feeling on the bike from FP1. We have just been making small changes on the bike throughout the weekend getting used to the conditions. For the team to get a 1-2 in qualifying was great. I think the pace we had for the race was looking very strong but unfortunately that was not meant to be. It is a shame that both the BMWs got taken out in the way they did, only a couple of hundred yards from the start line. It was a thoughtless and reckless move from Garret, and it has left our boys a lot of work to do on both sides of the garage overnight. Unfortunately, we have had our fair share of bad luck this year and today is one of those days. Tomorrow we will come back stronger and get the results that the whole BMW Motorrad WorldSBK Team deserve.”