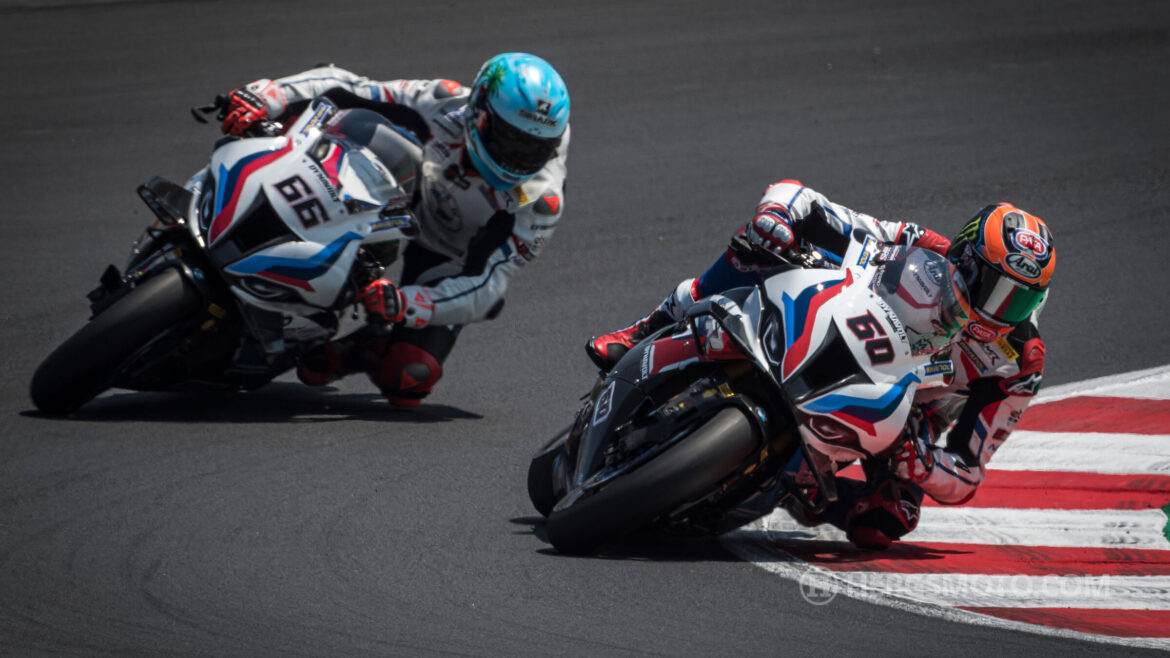 While BMW Motorrad Motorsport celebrated third place at the ‘24 Heures Motos’ at Le Mans with the BMW Motorrad World Endurance Team, Sunday did not play out as hoped for the WorldSBK side of the BMW family at Misano (ITA).

The best-placed rider in race two was Michael van der Mark (NED) from the BMW Motorrad WorldSBK Team in tenth place. His team-mate Tom Sykes (GBR) was twelfth. Eugene Laverty (IRL / RC Squadra Corse), who was given the go-ahead by doctors this morning after his crash on Saturday, came home in 15th place to pick up a point.

Sykes started Sunday morning’s Superpole race from fifth place on the grid. He initially found himself in sixth after the start and crossed the finish line in seventh after ten laps of racing. The second-best BMW rider in the Superpole race was Laverty in 13th. Van der Mark consistently worked his way forward from 13th place, but then crashed out on the sixth lap. Folger, who was running behind him, was forced to take evasive action and consequently fell back through the field, eventually ending the Superpole race in 19th place.

Van der Mark started race two on Sunday afternoon from 14th place. He made gradual progress from lap two and crossed the finish line tenth after 21 laps. Sykes was running sixth until the sixth lap, but then dropped back to ninth after a battle with his rivals. Shortly after that, he found himself in twelfth, and went on to cross the finish line in that position. Laverty also finished in the points in 15th. Folger was 14th for long stretches of the race, before dropping back to 16th.

Quotes after race two at Misano.

“We were definitely not where we expected to be. As such, it was disappointing. We did not manage to transfer the set-up from one circuit to the next with either Tom or Michael. The opposition can clearly do that better than us. All weekend we failed to give our riders a bike on which they are competitive. In the case of Tom, we reckoned on him taking eighth place. We must now find out why he fell so far back. Michael’s poor grid position once again left him with a mountain to climb. In the closing stages of the race, he was matching the pace of the seventh and eighth-placed riders. He eventually finished tenth, but on the whole it was disappointing because we definitely arrived here with greater expectations. We must work on being able to transfer a basic set-up from one circuit to the next. Before the next races at Donington Park we will do some testing at Navarra, where we will do our homework and work really hard. Congratulations at this point to the BMW Motorrad World Endurance Team on their third place at Le Mans – respect to the guys. Their success saved the Sunday a bit for us here at Misano.”

“It was a really tough weekend for us. We came here with some high expectations but in the very high grip levels we found it difficult to get Tom and Michael comfortable on the bike. We had constant front-end chatter problems. The mechanics and the team worked all weekend trying to find a good balance; we’ve worked on the bike in a lot of areas but unfortunately we couldn’t find a setting for them both. Tenth and 12th doesn’t do the effort justice. We’re a long way off where we want to be but we have a test at Navarra coming up where we can check things over and we will see how we can come back stronger from this. We will be ready and are looking forward to the test at Navarra and then our home round at Donington.”

“I think we should not be really happy with this result. In this morning’s Superpole race I made a mistake by myself. I entered T1 way too quick and then I lost it. It was a shame because we tried something on the bike and we didn’t know if it was better or not. In race two, I had a not so great start. I had problems at the start and then I gained some positions back but unfortunately we can be really consistent but we are just too slow. It’s difficult, but it is like this now. Soon we will be testing and hopefully we find some solutions.”

“To be honest, it was a difficult day. After the Superpole race we had quite a good feeling actually but we were missing in some areas and only really could finish in the top-seven, which for me is not acceptable. So we tried something with the bike for the big race, but unfortunately that was not working out. At least we got a lot of information out of it. It was a difficult race for me and we learned a lot on the back of it now, so we keep working now. After another test we are going for the next round to Donington. I would like to think we’ve got the package to fight for the race there. We need to get on top of the little issues which we have got, so we hope for another step forward with the BMW M 1000 RR. For now there will be a disappointing end of the weekend here at Misano, but we pick ourselves up and try to move on.”

“The important thing is to get back on the horse and that is all today was. I am a racer and when I feel that I can ride the bike and score one point then I feel I owe it to my team and to BMW. So to score one point makes it worth it for me. Today, I was physically far from 100 per cent but I am happy that I raced because this is the important thing, to get back on and then recover next week and be ready to come back 100 per cent strong again.”

“Race two was our best result here at Misano, at least as far as our speed is concerned. We felt the heat and the tyre really heated up nicely. After this morning, we changed the transmission ratio a little which improved things. I was running really well in the first half of the race and managed to catch Tom Sykes. However, my front tyre then gave up on me and I had three slides, which I was able to save. The fourth time, braking into turn 4, I had a highsider that I only just managed to save that resulted in me going through the gravel and I lost positions. It was a shame that we missed out on the points as a result of that. However, our speed was better and we will take the positives with us, even though it was a tough weekend.”