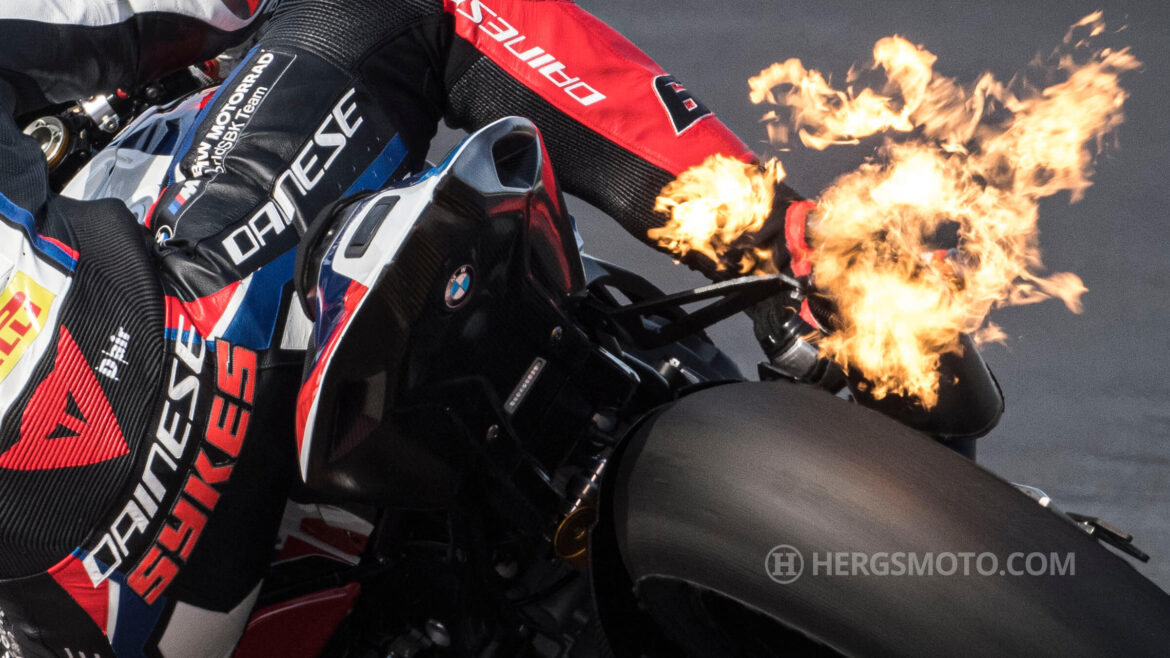 After a private test at Jerez de la Frontera (ESP), the new BMW M 1000 RR met its competition from WorldSBK at the Spanish circuit.

Tom Sykes (GBR) and Michael van der Mark (NED) from the BMW Motorrad WorldSBK Team completed many laps during the test on Wednesday and Thursday, as did Jonas Folger (GER) from Bonovo MGM Racing.

Sunny weather made for good conditions on both days. Among other things, the two days were used to test various components and developments on the new BMW M 1000 RR. The bike competes in WorldSBK for the first time this season. The handling on different tyre compounds was also evaluated, and the team worked on configuring the bikes and the electronics to the individual needs of the riders.

The 2021 WorldSBK season starts from 21st to 23rd May at MotorLand Aragón in Spain.

“We were able to work through an extensive programme and test out a lot of things and settings over the course of the two test days. The feedback the riders have given us, on the developments we have implemented over the past few weeks and here at the test, has been positive. It is always exciting to take to the track with a new bike and alongside the competition for the first time, and to see where you stand in comparison to them. We are moving in the right direction with our new BMW M 1000 RR, although we obviously still have some homework to do. We will do that now and work on improving all areas of the new bike and fine-tuning the riders’ individual set-ups.”

“It has been another positive test after Jerez. Both riders, Tom and Michael, have continued to work through chassis and electronic set-ups. Lap times have not been particularly important although it is good to be against the competition to see where we are. We still have some work to do. Both riders had no major technical or any other issues to be concerned with. I think durability, performance and the whole team as a group working together has been the positive. We are pleased to leave the test in good shape and are looking forward to our test in Aragón.”

“It has been a very useful test. We’ve been able to find out a lot more about the new BMW M 1000 RR and we definitely gathered a lot of information. We’ve made a good step forward in terms of the engine performance and certainly a couple of other areas on the bike but I would still like to work on traction from the chassis and we are looking at a few different options already. For me, it was good to add two more days of testing to the bike. It is still very new and coming here against our competition, we were able to see exactly where we need to improve. So it was a very, very useful test and I am happy to get this information under our belt and build on that. The whole BMW Motorrad WorldSBK Team has a few weeks now where we can work with the information we have gained over the past two days.”

“It has been good to be on track again, especially with the other competitors. We still have a lot of things to try and to discover on this bike especially for me. Sometimes it’s not easy but we found some positive things on the bike and there is a lot of data. Overall, we had two days of testing with hardly any problems which is really important for us because so we could do a lot of laps in order to improve the bike for the next test.”

“The test started very well on the first day. After the Jerez test, there had been some new developments regarding the electronics. The support provided by BMW is great and it helped us a lot to make such a step in the development between Jerez and Barcelona. I was very happy with the behaviour of the BMW M 1000 RR. As a result, we had a great base for our work from the first lap on. On Wednesday, we tried a lot with the electronics and also the one or other thing at the chassis. On Thursday, we more focused on tyre performance, to see how long the tyre lasts respectively what we need to do over the distance of more laps. Overall, I am very happy with the job we did here as a team and I really enjoyed riding.”