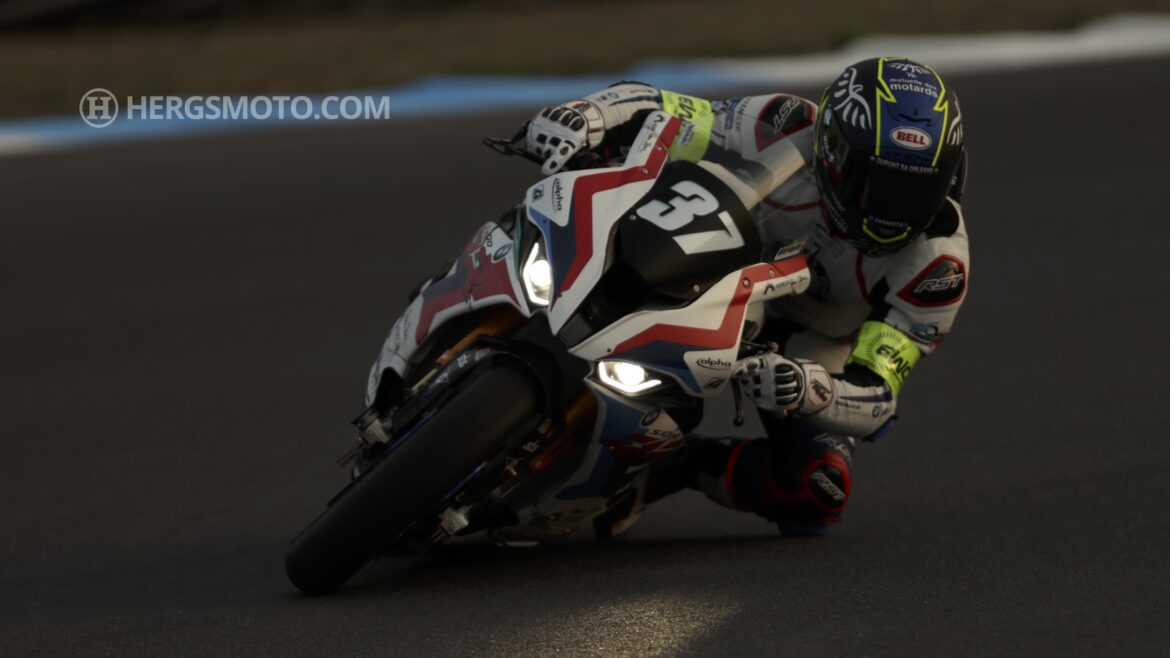 One year ago, the BMW Motorrad World Endurance Team started its debut season in the FIM Endurance World Championship (FIM EWC) at the Bol d’Or at Le Castellet (FRA).

This weekend, the team’s first season drew to a close with the ‘12 Hours of Estoril’ in Portugal. The #37 BMW S 1000 RR, with riders Markus Reiterberger (GER), Kenny Foray (FRA) and Peter Hickman (GBR) in the saddle, was once again one of the fastest bikes in the world championship at the fourth and final round of the season. However, luck was not on the team’s side in the race, and the #37 had to settle for seventh place after twelve hours of racing.

The BMW S 1000 RR demonstrated its speed already in qualifying. Reiterberger set the fastest time across all the qualifying sessions with a new lap record. The BMW Motorrad World Endurance Team lined up in third place on the grid for the 12-hour race, with grid positions determined by the average time of each of the three riders’ fastest laps. The race started at 08:00 local time on Saturday morning. Sunny weather meant track conditions were dry and good.

Start rider Reiterberger had climbed into second place soon, and it was not long before the #37 BMW S 1000 RR was leading the race. He then set about pulling clear of the chasing pack. The BMW Motorrad World Endurance Team spent over an hour at the head of the field, before things took a turn for the worse. Hickman skidded and crashed in a left-hander. He was able to continue, but the relatively minor crash caused such severe damage to the bike that it required a long stop for repairs. That saw the #37 bike drop back to 19thplace, eight laps behind the leaders. As the race progressed, the trio of Reiterberger, Foray and Hickman set about gradually working their way back through the field. After 12 hours, the #37 crossed the finish line in seventh place. The second BMW S 1000 RR, Team LRP Poland’s #90 bike, finished ninth.

The 2019/20 season, which started one year ago at Le Castellet, was reduced to four races as a result of the coronavirus. The BMW Motorrad World Endurance Team claimed its first podium against the top-class world championship field with third place at the opening round. The next podium came in the second race in mid-December at Sepang (MAS), courtesy of another third place. After a break, the season resumed at Le Mans (FRA) at the end of August. Shortly before the finish, the team crashed out whilst running fifth. Seventh place at the finale in Estoril means the BMW Motorrad World Endurance Team ends its debut season in sixth place overall.

Quotes after the ’12 Hours of Estoril’.

“It is obviously disappointing at first, when you suffer such a set-back whilst leading the race. We had our sights set on a top finish and saw that we had the potential to achieve that. However, these things happen in racing. Neither the team nor the riders buried their heads in the sand after that incident. Instead, they battled and gave it their all right through to the finish. Although we did not get the result we were after at the finale, you have to look at the big picture. It was our first season in FIM EWC, with its very strong field, and we had little preparation time before our first outing at the Bol d’Or one year ago. We have twice finished on the podium in this season’s four races, and were extremely competitive at the other two events. In addition, we were able to prove the reliability of our RR at the Le Mans 24-hour race as well as at the 12-hour race at Estoril, even if we lost strong positions there due to riding mistakes. That is overall not a bad record for us as ‘rookies’. The BMW Motorrad World Endurance Team and the BMW S 1000 RR have established themselves among the best in the world at the first attempt. I would like to say a big thank you to Werner Daemen, Steven Casaer and the entire team for the hard and highly-professional work they have put in this season. We achieved a very high standard in our first year, which gives us an outstanding basis for our second season in FIM EWC. Congratulations to our tyre partner Dunlop who won the title with SERT. We will start a new attempt to fight for the title in the coming season.”

Werner Daemen, Team Manager BMW Motorrad World Endurance Team: “In the end it was seventh place and we are not really happy because I think that we could have won the race without the problems we had. ‘Hicky’s crash was of course a big problem and we lost many laps as we had to repair the bike including a change of the swing arm. When you see the gap we had at the chequered flag I think that the win would have been possible. Markus did a tremendous job, as did all riders and the entire team over the whole week. Only the crash was a pity. After Le Mans, it was the second time we lost many points due to a crash. But it was our first year in the FIM EWC and we have seen that without crashes we can fight for the world championship – this is really not bad for the first year. So overall I am a happy person but a little bit disappointed from the result today.”

“I had the honour to do the start and it went very well – I was a fast runner and then I came off pretty fast. Other than the two guys in front of me, I had decent grip pretty early and I passed them. I then built a gap over my stint which was very good and important. ‘Hicky’ initially stepped up on this but then unfortunately crashed. I feel sorry for him as he just made a small riding mistake. It was a pity for the entire team but you can hardly reproach him for that. It was a normal racing crash that can happen to everyone. The team did a superb job and repaired the bike extremely quick. After that, we rode super stints, at top-three level, even though we still had the one or two issues related to the crash. We worked our way up to finish seventh. Of course we had hoped for a podium or the win and that definitely would have been possible. But this is Endurance. It was a great event on a fantastic track and I only can say ‘thank you’ to the team and to my team-mates. All gave their very best and the day will come for us to be rewarded again for our work.”

“The race is over and the championship season is over and for sure it is not the result that we had expected. But this is racing and I think that we can learn a lot from the last two races. For me personally, the final race at Estoril was not easy because after the crash the bike was not easy to ride so we needed to adapt our riding style. But that is endurance; you need to be able to adapt to everything. And we were able to push and to work our way back to seventh place. This result is not so bad but I think that we were able to make a podium today. But it’s like it is. We learn and come back next season.”

“I really want to say sorry to the team because we had the pace to actually win this race and my mistake was what caused all the problems which is a big shame. But it was good to show that we had the pace and the team worked really, really well in getting the bike back on track. I think that overall, we have shown the potential of the bike and the riders but it is just disappointing not to have won the race. Sorry again to the entire team.”

Well done to the entire team for their debut season. A credible foundation for future success. – Ed.